In order to understand the Seismic Zoning method and how it pertains to the Steel Reinforced Concrete Dome, we must first understand what effective peak ground acceleration means and how it is measured against gravity.

First let’s discuss what is meant by ground acceleration. It is not unlike the feeling we have when a car takes off at high speed, or when we ride the roller coasters at Disneyland. In order to measure the acceleration of an earthquake, it must be measured against Gravity (or 1.0g). Gravity is the rate at which an object falls when dropped from being at rest in a vacuum. It is quite a high rate of acceleration. It is approximately the same as a car traveling 100 meters from rest in just 4.5 seconds.

There are instruments called accelerographs that measure ground acceleration against the value of gravity. (acceleration in g/10) These values are gathered from all parts of the nation to create a seismic-risk map, which is used by engineers and builders when designing earthquake resistant structures for different parts of the country. 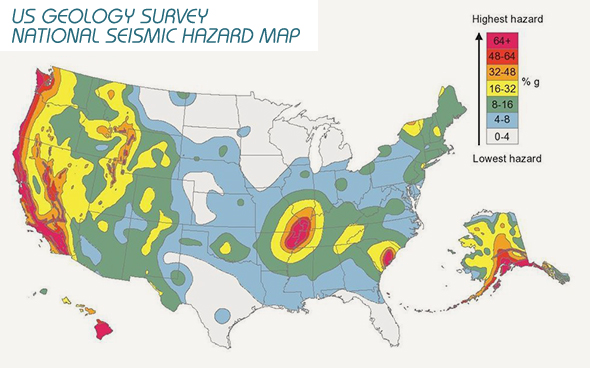 USGS National Seismic Hazard Map — These maps are based on current information about the rate at which earthquakes occur in different areas and on how far strong shaking extends from earthquake sources. Colors on this particular map show the levels of horizontal shaking that have a 2 % chance of being exceeded in a 50 year period. Shaking is express as a percentage of g (g is the acceleration of a falling object due to gravity). Areas in red have a much higher likelihood than areas of white to be exceeded, for example.

Another important thing is factored into plotting of the seismic-risk map is attenuation. Attenuation is, basically, how far earthquakes waves are felt, and what the duration of the earthquakes is. This is very different in various parts of the nation.

The Steel Reinforced Concrete Dome is designed for zone 4.  Dr. Arnold Wilson, a leading engineer in thin shell concrete construction, has said, “It is easy to see that earthquake forces do not even approach the design strength the Steel Reinforced Concrete Dome is built to withstand under normal every day usage. It would take an external force much larger than an earthquake to approach the design strength of the concrete itself.”