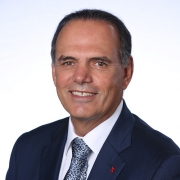 Peter Fedele is the Chief Executive Officer of American Business Continuity Domes. He also serves as the President of Golden Sands General Contractors, which he co-founded in 1988.

It is his vision and experience that is the driving force behind ABC Domes, a U.S. based developer of disaster-resistant, steel reinforced concrete domes. After many years in the general contracting sector and responding to clients’ needs in the aftermath of natural disasters, he identified and cultivated markets that demanded highly secure and disaster resistant commercial facilities. ABC Domes was thus established in 2006, with Peter’s vision serving the company well as it continues to expand throughout the country.

As CEO, Peter directs the company’s market expansion and continues to spearhead the development of the domes’ innovative features as well as ancillary products. After years of successful collaboration, he forged a strategic alliance with two of the most renowned dome design, engineering and construction firms in the world – Dome Technology and ES2 as well as with joint venture company, Golden Sands General Contractors. This powerhouse dome team, which represents the high end of the dome development market, is currently engaged in projects ranging from multi-purpose community safe shelters throughout Tornado Alley to BDB Flex Storage domes at ten nuclear power plants in the U.S.

Peter Fedele is a graduate of Loyola University, Montreal Canada and holds licenses as a General Contractor in multiple states.