SEALY — It could be the plot of a sci-fi paperback: Over the course of a single workday, a giant bubble is inflated on the outskirts of a small Texas tow 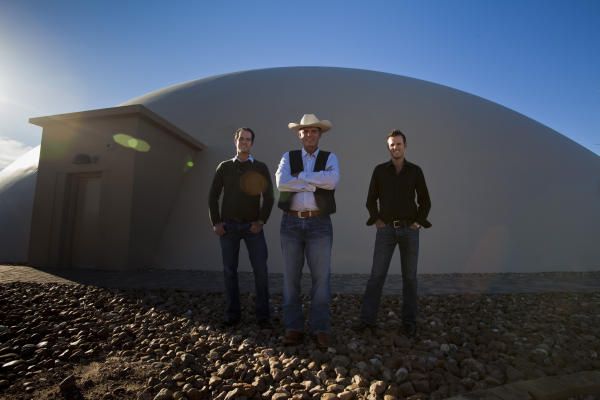 Crews working from the inside reinforce the structure with iron and concrete until it’s a fortress that not even the U.S. Air Force could destroy. A security fence around the perimeter keeps the curious at bay.

But the story of the 33,000-square-foot dome that’s risen like a blister on the prairie off Interstate 10 in Sealy is no work of fiction. It’s the Texas home of ABC Domes, a company that specializes in helping banks get back to business in the wake of terrestrial disasters.

Inside will be stored generators, trucks, communications equipment and an array of repair supplies waiting to be dispatched as soon as the next hurricane or tornado (or wildfire, earthquake, etc.) has passed. When there’s notice, as with a looming storm, workers will be housed there as well, ready to roll as soon as the wind dies down.

“We have no excuses,” said Peter Fedele, the company’s managing director, who is overseeing the project. “We have to be prepared all the time. We have to be protected.”

The company, formally American Business Continuity Domes, is a division of Miami-based contractor Golden Sands, which has been building bank branches, vaults and ATM outlets since 1988.

Working primarily in Florida, Golden Sands developed expertise helping banks reopen quickly after hurricanes, including the devastating Andrew in 1992. Giving people access to their money is key to getting a community back on its feet.

“During a storm, the No. 1 commodity is cash,” said John Fedele, Peter Fedele’s son and the company’s chief operating officer.

Then came the relentless 2004 and 2005 seasons, during which six hurricanes battered Florida. Said Peter Fedele, “We got pretty good at disaster response.”

Golden Sands spun ABC Domes into a separate unit that contracts with businesses and began working out-of-state disasters, including last year’s Tennessee flooding. It leases space in the domes on a monthly basis and provides recovery services.

In 2008, as forecasters determined Hurricane Ike was Texas-bound, ABC Domes was invited to join a conference call among financial institutions that were likely to be affected.

The company was hired to help with the recovery and set up at the yard of a generator company in Houston to wait for the storm.

LOTS OF WORK IN GALVESTON

Afterward, crews headed for Galveston with water extractors, dehumidifiers and industrial-size dryers. They ripped out soggy carpet and began working on damaged roofs. They set up generators to get the ATMs working again and got communications re-established. They treated for mold.

“The faster you get in,” said John Fedele, “the more you can mitigate the damage.”

ABC was on the scene four months, helping clients and delivering ice and food to other relief workers.
Executives saw opportunity in Texas’ 367 miles of coastline.

A private company with sensitive clients, ABC doesn’t talk in specifics about its finances. But John Fedele said it’s poised to expand westward.

“We have tripled annual revenues the last two years,” he said, “with growth patterns to move to a national presence.”

Opening the dome in Sealy is the first step.

CHECKING OUT THE DOME

On a recent Friday afternoon, select citizens were invited out for a look-see, barbecue and live music. Guests were offered the chance to ride in a wagon pulled by Clydesdales. A deacon from the Catholic church blessed the gleaming oval as everyone bowed their heads.

Some folks posed for photos with a 2,300-pound longhorn steer, but the dome was clearly the main attraction.
Kimberly Judge, Sealy’s director of planning and community development, said she first considered the economic potential for the town of 6,000, where a Wal-Mart distribution center and a frozen-vegetable packaging facility are major employers.

“My second thought was, ‘Domes? On Interstate 10?’” she said. ” … We welcome growth, but we didn’t want something outlandish.”

She was quickly won over. ABC was impressed with Sealy’s pro-growth attitude, and the company declined tax abatements. The company plans to build two more domes and a helicopter landing pad on the site and hired a local, Maria Hahn, as the senior administrator.

ABC had considered Conroe and Katy but decided Sealy had the best coastal access via I-10, Texas 36 and other routes. Plus, it’s far enough inland -about 50 miles west of downtown Houston- to be safe from the immediate effects of a hurricane.

As construction began, Peter Fedele heard some of the rumors going around: A secret government installation? A landing pad for Martians? Most people who called Judge wanted to know if it was an emergency shelter.

HOW IT WENT UP

As it has previously in Florida, ABC turned to C-Shells architects and Dome Technology construction from Idaho Falls, Idaho. First a 165-foot-diameter concrete-and-steel ring was erected, and then a large fabric was attached and inflated over the course of several hours. It remained so until the interior shell was hardened with a combination of polyurethane, rebar and a special form of concrete that is blown in like insulation in a home attic.

The shell, rated to withstand 300-mph winds, cost about $35 to $40 per square foot to build. That puts the project at a little more than $1 million, not including interior build-out of office space and a few dormlike rooms for crews waiting to be dispatched.

The result is a self-sufficient, LEED-certified and relatively inexpensive structure certified to withstand Category 5 hurricanes, tornadoes or just about anything else Mother Nature can hurl its way.

Dome Technology has built some 500 domes worldwide over the last 30 years, and in the 1980s built some in Iraq. When the Air Force determined Saddam Husseinhad installed a bunker under one of them, it deployed a fighter jet armed with a 5,000-pound laser-guided bunker-buster bomb.

But the dome itself is still standing.